I have run into an issue of connecting too many USB devices - currently at 42 drives.
Current config: 1 Motherboard to 6 ea of 7-port USB hub

There is a solution for farming in multiple machines which I will do, but I prefer to max out to around 100 per motherboard first.

Reading through sites, I come across the usb controller limitation which I try to find info in motherboard datasheet and manual but cannot find any.

If anyone can recommend the way to find and/or specific board/chipset would be great.
Do I need to go with Z590 which is quite expensive.
My objective is the most cost optimal “Available USB devices for farming per $$”

Do you have PCIe x1 slots left on you board? Then add a few cheap USB 3.0 controllers to your setup. They have their own limit of connectable devices.

I added the pcie to USB adaptor with 7 ports in it.
Still I get error on this limited xchi controller

The issue you run into with USB is that you are limited not only by the USB 3/2/USB-C (or Thunderbolt) controller but also by 4 things.

No motherboard can do what you want. USB was never designed for that.

A small cluster of raspberry pi 4 harvesters seems to be a sensible idea. At £30 each and only 3-5W running plus your usb hubs/drives it seems to make sense.

Lasting Quality from GIGABYTE.GIGABYTE Ultra Durable™ motherboards bring together a unique blend of features and technologies that offer users the absolute ...

…and them add some PCIe USB cards to it?

Good idea but most likely won’t work. You will hit the wall of internal PCIe lanes and XCHI and the power that the motherboard can pass (part of power passed when passing data).

What about active USB-Hubs?
Board with 10 Connectors, Each connector to a 10Port-Hub? That COULD resolve the power-issue!
And the IO should be enough for farmin / harvesting if you dont use just the onboard-Controller but spread controllercards over pci-slots? Or am i wrong?

Active USB hub just means Powered hub. The issue with 100+ USB devices is an issue with I/O limitations with ALL motherboards ever made. Active hubs only partially solve the power issue and the I/O split issue, but that doesn’t resolve not having enough I/O or the motherboard not being able to supply enough power for the data going to the devices.

Take the 100 (probably SATA) disks out of the external USB enclosures, connect them to one or more HBA controllers/expanders. I have 40-ish and counting on one motherboard - I think I will be able to do 96 - and although these all started out as ‘normal’ SAS/SATA disks, inside most USB enclosures is a normal SATA disk.

This will void your warranty, and comes with its own problems to solve, but this is a far more common configuration (100s of disks) rather than what is - until now - very unusual (100s of USB devices).

I’d argue the removing all the disks from the enclosures is a good thing, AND you can resell the enclosures for $20 a pop, so you can easily make back any money you invest in an HBA and whatnot.

To connect a large number of HBAs you also probably need quite a few PCIe lanes too though - I am using this:

And there’s no need to run those HDDs are full speed when farming. I feel like the same thing could be accomplished much more cheaply.

I mean at least the board already has 16 x SATA ports. That helps a bit.

CPU was around 400 USD in my currency… but it was something I bought ages ago for another purpose. Motherboard was a lot cheaper than I’ve ever seen them since, too.

It’s almost certainly overkill indeed, but it gets good challenge response times, and was something I had in the cupboard.

Could possibly run 100 USB disks on it instead even, with enough USB PCIe cards, but I wouldn’t try, can’t even imagine plugging 100 wall transformers in.

and was something I had in the cupboard.

Anything already owned is usually the best solution, unless power consumption is crazy. I assume since the system isn’t under load this isn’t an issue however. 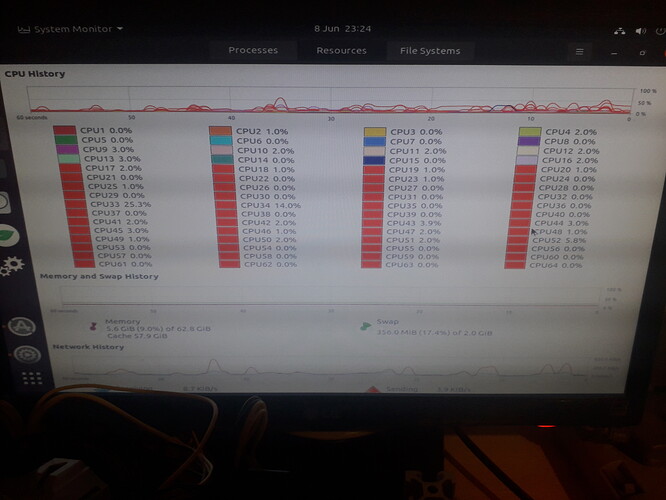 Apologies for a low res pic, of a low res VGA screen… but it certainly isn’t built for gaming.

Just get a JBOD/Disk enclosure and and the recommended interface card and 2 mini SAS cables. Put all the drives in the in the JBOD and that will solve the problem of what to do with the drives. Just another option since people are suggesting similar.

The “ETH mining” motherboard cannot surpass that limitation? because it seems they also use so many PCIe slots.

I try not to chuck them and use SATA interface because of warranty. Current limit around 30ish devices.
Heard that downgrade to USB2.0 can help increase the limit?

Heard that downgrade to USB2.0 can help increase the limit?

Is USB 2.0 fast enough to take Chia challenges and answer them in time?

I would assume that the challenges would not be comprised of too much data, and a 2.0 port can easily handle 20+ megabytes per second. And I suspect that it would not slow down the time the connected drive takes to send back a reply.