Where is the bottom

Yea you gotta stop posting, it’s screwing us all!

Not claiming that it is in the interest of the VC(Venture Capitalists). But it could be of interest to any other party that’s late to the game and wants to get in during IPO as cheap as possible

When VCs invest early, they have just one goal - the exit. They don’t care if company will burn the day after that, as they made their money.

Whelp in a previous thread I mentioned that $100 barrier, and when we see that, what will happen. The drop currently is related to BTC so I don’t see this as a Chia problem. The primary concern for me was the lack of bounce back which again I commented on a while back in a previous thread. The key for me is whether there is some element of bounce back with Chia on this latest downturn. The expression misery loves company applies here. Not a panic button for me just yet.

Farming wise though, I have MANY empty drives that quite honestly I have no motivation to fill and farm right now. I always equate things. So for example, if I could run my GPU and ETH for 1 day and make what my drive could make in 30 days, it becomes a nonsensical exercise. Yes empty drives make no money but at the same time they are not using electricity. If I could go collect bottles for 1 hour and make what half of my drives make? I only mention this because it was bad around $150 but if it’s less than $100? I’m definitely into Chia but I’m not into wasting energy or making noise in my home. Selling some of my farming equipment is also another way of dealing with a sub-$100 Chia price. When you start talking pennies per TB I basically have the freedom to say GTFO.

Bottom line for me? No bounce back when BTC goes up after this crash, then for sure Chia will take on a big negative PR issue. Maybe they have good news stories to come and that will shift the dialogue, but crypto is largely a community and if that community sours, then we (the farmers) will move on. You can have all the corporate interest in the world but if you don’t have the little people (farmers) then you haven’t a leg to stand on. Chia can be a corporate play and that may be their focus but negativity is negativity and any corporate players can read articles and catch a drift of something.

The last shoe to drop for me is if Chia has no ability to bounce back from this collective crash. No words will need to be said. The audience at that point would have spoken.

But XCH has never really bounced back, it has been on a steady decline since reaching its ATH on May 15! Unfortunately, when BTC goes up, XCH stays flat, when BTC goes down, XCH follows.

It depends when you starting looking. On a micro scale it did have bounce back but it depends when you started watching and your level of observation. Trend? Dropping. Not disputing that trend and an overall trend since opening. I would say since around summer the ability for Chia to show resilience has faded. Most every other coin had bouncebackability. Chia started to lose that and that has always been my concern.

I don’t think this post is the doom and gloom on the Chia price. 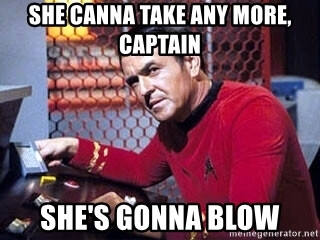 But seriously, farming XCH worth less than $100 USD will put most farmers into negative productivity for farming costs vs earnings. When we were having this conversation at $150 we were already working the numbers …

In an odd way I can visualize Bram snickering at all of this. I know the messaging or counter argument has been the bloated net space. New entrants into the farming space is the indicator that I would be looking at if I were running Chia. That is the tell tale. The hangers on from when Chia launched is by no means an accurate or responsible measuring stick of confidence in the coin. Is that what we call a red herring? Again, the idea that big servers with unused space are going to bother with farming Chia when it’s at a $100 or sub-$100 value is what I call a tough sell to the boss. Those data centers will find the added electricity and hardware usage worthwhile. On top of maintaining the farming which take human hours? Further to that if you have bloat in your data center then selling hardware is a far more viable and rewarding venture. It’s one and done. Either that or farm for 5 years to do what you could do in about 24 hours if you price the hardware correctly.

I’m moderately confident that Chia will get back to its $140-$150 price with all this said. Relating it to a real world scenario, it’s like wearing rubber boots, getting your feet stuck in mud. Pulling out only sucks the boot in deeper. Maybe you have to leave the boot behind and get out with dirty socks but sparing yourself from getting sucked in.

Have a great day everyone!

Look at the zec chart.
Very similar story, futures pushed up the price at start to a daft price, coupled with scarcity as it was a new coin.
It tanked, as did chia, this was very predictable, and why I advised those hodling when we were alot higher to short it it was the obvious play.

yeah that probably is it. These margins are thin AF that are pushing XCH right now

Where did they sell the xch at $1600 since you couldn’t find it on any exchange at the early stages and pumped prices?

When XCH was at $1600 I believe the only way to trade it was via buy and sell forums, direct messages, etc.

does it mean that 1600 price was/could be totally manipulated/faked by several faked ids?

It means the people that bought the first farmed XCH thought it was worth that much.

There are three factors here for crypto in general.

The fed is more hawkish. Powell and his mouth have spooked the markets. Interest rates coming, but how soon?
Jobs - came in well under the estimate - big shock
New variant - the market does not like unknowns
My fourth would be Evergrande defaulting

You get into something due to proper DD and conviction of the play to you. For me, Chia is still on track for all of their business targets, and remember, how long did it take BTC?

For me, Chia is still on track for all of their business targets, and remember, how long did it take BTC?

You can’t compare it with BTC, back in those days it was just BTC, now there are 15,189 coins/tokens (coinmarketcap) all competing for the same thing.

I got into XCH because it is a good idea and I’m still farming​:seedling:

but unfortunately, this industry is constantly evolving. When XCH was launched DeFi 2.0 was just taking off, the metaverse was virtually unheard of, and the meme coins were supposed to be just a joke, now there are over 100.

We’re heading to 2022 and I have no idea what’s next but as time goes, one thing is for sure, more new altcoins, more competition, more regulations. I predict a lot of altcoins, if not already, are starting to fade into obscurity.

with players in China exit more and more, I am not optimistic on it anymore. The big players are gone

I am not optimistic on it anymore

For farmers, I agree. I see little better than subsistence farming for a the next couple years.
IMOP traders, farmers, and HODLs have a very good chance of substantial long term gains. Once the XCH pre-farm starts to be used as equity and Chia Inc. becomes part of the banking system XCH could easily become one of the best bets made since the early BTC buyers.

The big players are gone

Even from a farmer perspective this is incorrect. Chia netspace may have plateaued but it has not plummeted. The big, early plotters are still farming.

From a Chia Inc. business perspective there is only one “big player” that matters, The World Bank. They are certainly not gone.

Yeah. I don’t see this either. If the big players left, I believe we’d see net space drop. We haven’t seen that at all.