As everyone may have heard, there are 3 innovations coming from Max soon. These were developed around Aug-Sept 2022 and Max has been farming using them so they definitely work. There’s a bunch of posts discussing this in passing so I’m combining them here. Max has stated he is considering releasing all of this as a closed source Chia client with a dev fee.

Gigahorse is a madMAx chia plotter for NVIDIA GPUs which creates compressed k32 plots fully in RAM with 256G (recommended) or partially with 128G and one or more M.2 SSD’s. At Level 9 a K32 Plot is reduced to 68.9 GiB leading to a 47.2% increase in revenue per plot. A 3000 series Nvidia GPU is recommended although Gigahorse may work on older models, Max has mentioned adding in AMD support but has stated that they will be worse. An optimized setup with the best hardware will be able to plot under 120 seconds. Level 7-8 may be the most used as Level 9 uses a lot of your GPU’s power for a 6.6% improvement. I suggested calling these MC plots aka Max Compressed.

Max created a GPU farmer for these plots to allow for farming higher levels in mass. I don’t believe he has named it yet, possibly the Thunderdome? You can farm these on a cpu but the burden on the cpu gets too high around level 3-4 if you have a lot of plots. My guess is that a Pi can probably handle level 4 with 100-200TiB of plots but that will have to be tested.

Max also created a Plot Sink tool for distributing plots over your network.

Flexfarmer may support GPU farming. It has not been confirmed that this will be added in.

Or the madMAx one here

I will post links when this comes out and will have step-by-step instructions.

Hardware requirements (recommended requirements are recommendations, you can lower plot times if you exceed them):

CPU: 4 core or better (minimum) most plotting is done by the GPU so CPU requirements are minimal. A PCIE 4.0 compatible CPU with 8 cores is recommended.

Hard Drives: 1 or more to transfer plots to (minimum) Multiple drives in RAID 0 or over the network via Plot Sink (recommended)

Note: Much of this information dates back to Sept, things may have changed since.

Edit: 64gb gpu compressed plotting is confirmed to be on the to do list. 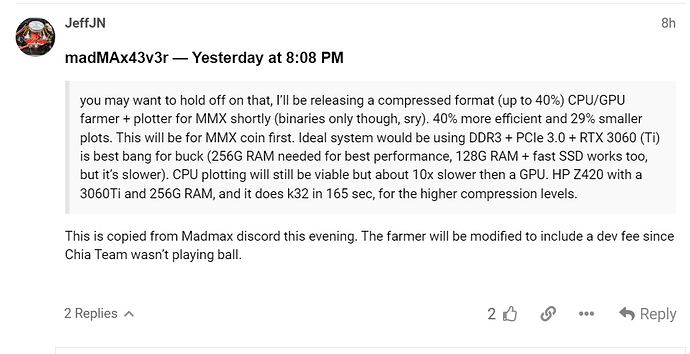 image974×500 65.4 KB
I think you forgot to mention we would all be donating our block rewards to madmax forever.

Fx if 50% of the network switches to his stuff, he will get 50% of all block rewards. 576xch per day every day in perpetuity forever. At $30 per xch, this program will garner him a monthly income of $518k per month, or 6.2M per year forever. For every $5 chia is above $30 he gets an extra milli every year. If chia hits $60 he makes a milli a month.

I really hope this is enough for him. We need to make sure we support the developers. Assuming he worked 40 hours a week on this since september he could have put in 680 hours. Obviously this needs to be compensated by millions of dollars a year every year.

According to the 5th line of the table this gpu farmer achieves performance comparable to our cpu-only miner. I am amused!

We at NoSSD pool have avoided bigger compression levels back then to stay green and balance electricity costs. 0.38 PiB with this level of power consumption is hardly economically viable.

The dev fee would only actually work out to be a few percent of a block reward not the entire thing, so your math doesn’t math.

the big question now is what compression level the plots 2.0 from chia-team will have.
then you can calculate whether it is worth a replot for these here, if you take into account the developer fees and the increased power expenditure for these lev 7-9 compressed plots.
in any case, this is not a good move if we go more and more to POW, because the green blockchain is one of the main arguments of chia

Sorry, my math was horribly wrong.

I assume that the plots 2.0 are also compressed up to 78.6GB then that would be just 109% efficiency with the lev 8 of MAX.
my 1,5PB farm consumes 600WATT kompleet.
With the 150 watt of a RTX 3060 I have 25% more power costs plus developer fee consumption at 9% more yield.
this seems then rather not worth it for me but the future will show.

My server, which runs my farmer amongst other things doesn’t have room for a GPU.

I think you forgot to mention we would all be donating our block rewards to madmax forever.

Because any fee and how it works isn’t confirmed.

Re @Jacek → Source, see picture. The only method to do a dev fee with chia is to make the plot payout address for your .25 reward. If he plans on taking less than 12%, he can make a smart contract that sends back some of the .25 but thats not a guarantee. There is also not a guarantee the smart contract will work forever. There is a guarantee that the reward payout address will be forever because its forged into the plot itself. It cannot be “removed” or altered, full stop.

The way the dev fee works on POW miners is that it sends the dev’s pool hashes I think. That wont work in chia because you cant change someone’s plotnft to dual mine pools.

@Digital please see my reply to Jacek. He has to take the entire .25 as it is a FUNCTION OF THE BLOCKCHAIN. He might return some of it with a smart contract or a script running on his node. Saying things like “The dev fee would only actually work out to be a few percent of a block reward” is misinformation. The dev fee is the entire block reward full stop, he might return some of it, maybe. If he plans to return half of it, there is no mechanism to do it other than “trust me bro”. There is also not a guarantee the smart contract will work forever. There is a guarantee that the reward payout address will be forever because its forged into the plot itself. It cannot be “removed” or altered, full stop. 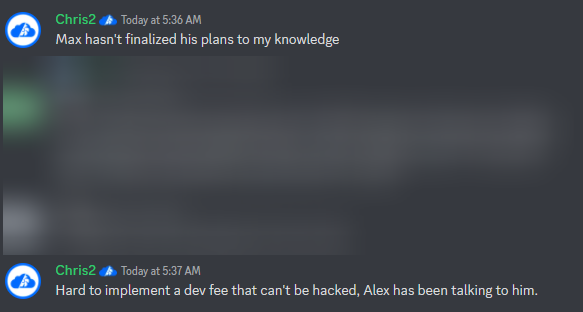 And tbh I agree w/ you guys. Make it flexpool specific and turn the flexpool fee up to 10%, then give MM a cut of the pool fee as-well because tbh Max needs 10M+/yr, 6M isnt going to cut it for his needs. Lets say chia lost value and chia went to $10. Now max is only making 2M/yr,. How do you expect MM to live off this? Devs need to be supported.

I don’t see anything in that picture that talks about how those fees will be structured. Assuming that it will really be that 0.25 XCH part, that is basically a deal killer for everyone and just wasted efforts.

Although, if that is the only option, then it may be that it will be implemented in the plotter that will take that .25 after XYZ plots created, not really as a farming fee / service. However, that .25 doesn’t flow through the plotter, so that is a dead end.

In case that is done on the harvester, I would assume that the harvester would need the RPC access to the node, as such was making those transactions at whatever level is specified. If the RPC would be cut off from the harvester, it would refuse harvesting. Currently, farmr could implement the same mechanism, as it has the full RPC access. Basically, every software that sits next to the node has such capability, as potentially there is no way to lock the RPC.

Also, the latest chia release has some wallet binding (don’t recall exactly), and potentially that could be a new protocol that software packages could use.

I guess, it is better to wait than to speculate.

Max hasn’t finalized how he is doing the fee there are multiple ways. Obviously the 0.25 on every block found would be too much. I would just wait until it’s released to see obviously it’ll be competitive.

Max isn’t making millions the same way we’re not. (We make like -$2000 a month off chia and that’s with not paying ourselves).

Given that Max’s plotter has done a lot for free I wouldn’t be quick to call him greedy just because he plans to implement a dev fee the same way almost every single miner software does. Ask NoSSD about the “millions” they are making off their 3.5% fee /s. Btw a developer of Max’s level can easily make $500k+ annually.

Also Chris2 is me and I’m an Owner not an employee. We do have employees but they have jobs

also they have a support or employee tag usually.

basically, the PB/GPU performance is actually only an estimate and the decisive factor is how many proofs the GPU can calgulate in a certain time window
I looked at a 380 TB harvester of mine and had to calculate 10 proofs at once in the worst case.
on the other hand, with a 2nd 780 TB harvester, it was a maximum of 15 proofs.
this shows that the statistical deviation is still very high for these sizes.
unfortunately you can’t draw any conclusions about the actual performance from these PB/GPU data and it would make more sense in my eyes to say how much time is needed to calculate n proofs.
with this you can in my opinion better estimate if the GPU performance is sufficient for your farm size and the compression level.

edit: this poof counts are for 34K with 32K this should be 4 times more.

Lower C levels are inefficient to farm on GPU, the harvester only uses GPU for C level 5+ on k32.

C level 9 is not recommended, only if you have free power.

Not sure what you smoking there my friend?

The plan is to have 6.25% dev fee, ie. every second farmer reward (0.25 XCH). The pool reward will always go to your plot NFT, it’s impossible to take that.

Only in case of OG plots it’s possible to take it all, but why would I ruin my reputation for a few XCH? Everyone will stop farming if my binaries would suddenly take all the rewards.

You have up to 25 sec to submit partials to a pool, or submit a block when solo farming. Signage points are every ~9 sec, so you have ~2.5x more time for the worst case scenario.

When farming NFT plots on a pool it’s important to increase the partial difficulty so you dont have to compute too many proofs. At least a difficulty of 16 is recommended.

It’s ok to have some stale partials in the worst case, losing 0.1% of the rewards is still better than running a much bigger GPU with 2-3x the idle power draw.

Ask NoSSD about the “millions” they are making off their 3.5% fee /s. Btw a developer of Max’s level can easily make $500k+ annually.

$500k is an appropriate reward for a single dev, this is why we expected to earn 2m for a group of four. Too bad you acknowledge this only now.